Blockchain app development is a highly demanding trend today. Hence, development companies are looking for experienced developers who are familiar with this technology. However, the cost to hire blockchain developers is high. Undoubtedly, the world of technology never ceases to amaze us, and the rate at which it progresses is astounding.

The technology is still in the early adoption phase, and businesses are taking a cautious approach to its implementation. However, there are organisations that see an opportunity for blockchain technology to streamline their business processes, reduce operational costs, and improve security.

In the past few years alone, software development and artificial intelligence have been so much innovation and development. Among these new technologies is blockchain, which has left developers scrambling to keep up with its rapidly expanding scope of use cases.

But how much exactly? What level of expertise do you need to get started with your project? Do you need a lot of them? Keep reading because we will answer all these questions and more in this blog.

Blockchain technology enhances the system’s security and keeps your data safe from cyber attackers. You know that the consensus mechanism is utilised for all your transactions on this technology. Thus, each transaction has a security code which is why a hacker is unable to determine and track transactions instantly.

It means you can keep your data and money secure. In order to use this technology in development, you should seek the help of professionals. However, it is not an easy task as hiring blockchain developers is expensive compared to other ones, so it is suggested to do research about it.

Another great perk is transparency. It means you don’t have to worry about what is happening inside the system. In simple terms, you can now look at the procedure going around in order to complete a transaction or perform a particular activity.

Nowadays, transactions are taking place more securely. You know that many machines do most of the tasks, which is why there are significantly fewer changes or technical glitches. Hence it improves the system’s efficiency.

In order to make this process, you can get in touch with a certified blockchain development company. Moreover, there are no requirements to enable the payment system, so the number of mediators and third-party persons decreases continuously.

Blockchain technology proves its value when no central actor enables trust and explains Daniel Field, head of the blockchain at UST, a global provider of digital technology and services. However, the cost to hire blockchain developers depends upon the requirements and experience of the developers.

These are some of the great advantages of blockchain technology. So, you can easily use this technology to develop an app that helps you transform the future of your business and enhance its performance.

Essential Skills Blockchain Developers Must Have in 2022 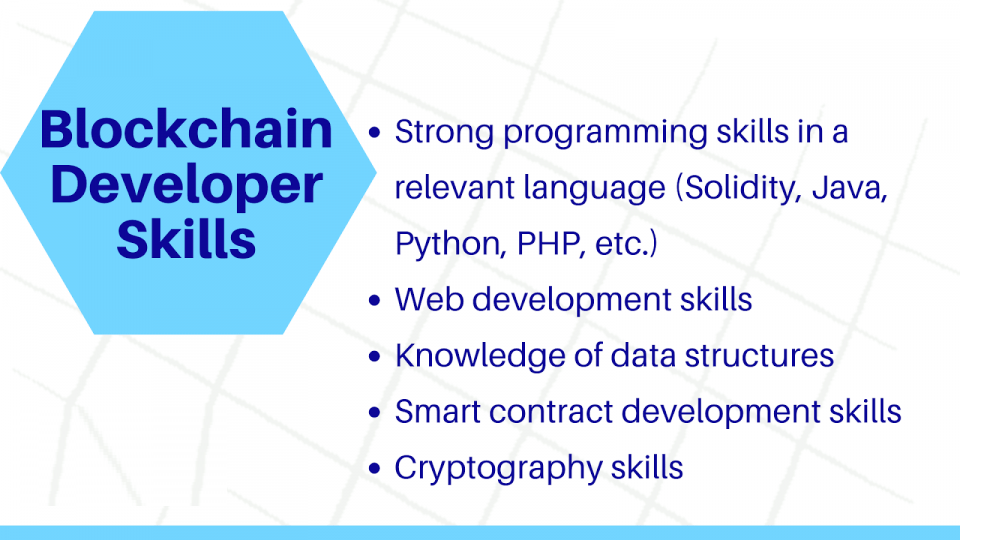 From the very beginning of research and analysis to the design and execution of the protocols, blockchain engineers are hands-on.They always use various programming languages in order to create interfaces, architecture and features for different purposes.

It is necessary to have an excellent understanding of blockchain technology for developers. We all are aware that the blockchain is a distributed database that allows for transparent, tamper-proof and secure transactions.

It works by using a peer-to-peer network in order to approve transactions, removing the requirement for a middleman. Hence, if you are looking to hire a blockchain developer, ensure they possess this skill set.

But the question is, what is the cost to hire blockchain developers? This is a difficult question because the overall cost depends on several factors. When deciding to hire dedicated developers, you need to check experience and other aspects.

This will help them to build an app or software using blockchain technology that ensures the success of your business. But, many people have a question about how much they should pay in order to hire dedicated blockchain developers. Well, it depends on the features you want to add to your app.

There is no doubt that blockchain technology is secure because it relies on cryptography. Hence, it is necessary to have a strong understanding of cryptography and security principles for a developer.

Cryptography is the practice of protecting information using techniques that are very difficult to break. It makes it essential for any third party to interfere with the data being sent between two parties and, in some cases, the sender and receiver of the data.

When hiring dedicated blockchain developers, you need to ensure that they have a good grasp of cryptography and security principles. They will make sure that you get the best services on time.

Of course, blockchain technology is a decentralised system which means no single entity has control of power over it. The distributed system networked computers communicate and coordinate their actions by exchanging messages with one another.

Read also: What is Blockchain and How Does it Work?

Digital contracts contain all the terms and conditions of an agreement between two or more parties. Once the contract is deployed, it runs automatically without third-party involvement.

Developers who understand how to write smart contracts will be in high demand in a few years. So, it is essential to keep this in mind when hiring dedicated developers.

Blockchain is a data structure that is based on cryptography. UTXOs for the bitcoin network and account/balance for the Ethereum network are the two most popular blockchain database types. Hence, blockchain developers need to be familiar with these concepts and how data structure works.

Factors that Influence the Cost of Blockchain App Development

App complexity is a problem a developer may face when it comes to developing web and app solutions. So, you must have an idea of the challenges end-users are experiencing to create a simple and effective app.

Nowadays, it is required for all companies to have digital solutions to bring productivity and growth. There are several business purposes and different types of apps, and each has different costs. Thus, hiring blockchain developers’ costs depend on the application you plan to develop.

This is another important factor that decides the cost to hire blockchain developers. We all know blockchain costs depend on several states, such as development, deployment, migration, maintenance, etc. The developers take charge according to development stages, which will help you decide the cost of hiring developers.

Apart from the development, maintenance and support are always required. Hence, the important cost-adding factor will include a slight amount in the blockchain development procedure.

How Much Does it Cost to Hire a Blockchain Developer?

The size and complexity of the project, as well as the type of work being done, will largely dictate this cost. The most important factor that influences the cost of hiring blockchain developers is the team’s skill set. Finding the right team members with the right skills is essential to meet the project’s needs in a timely and efficient manner.

This may sometimes mean hiring remote developers or bringing on additional team members. For a clear idea, we mentioned a table below:

Apart from this, the cost to hire blockchain developers also depends on the application industry. Here we also mentioned the table below in order to give you a slight idea of the industry-wise development cost.

However, it is an idea, so you should do proper research before finding a reliable developer for app development. You can also communicate with trusted and reliable blockchain developers for more information.

We hope this blog has provided some insight into what it costs to hire blockchain developers. Although blockchain technology is new and rapidly expanding, it’s important to remember that it is not a replacement for existing technologies.