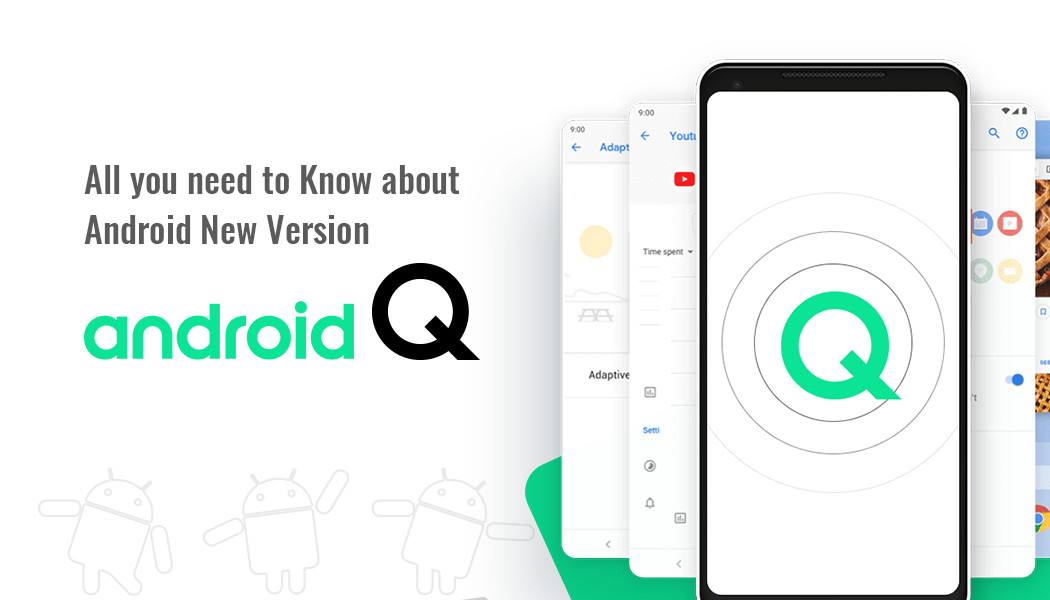 Android 10 or Android Q is an updated version of Android 9.0 or Pie. Breaking the conventional nomenclature policy acquired in its predecessors of naming them after the name of desserts, Android Q, or Android 10 released as ‘Android 10’ officially. This article on Android Q will help readers understand the top features, release date, and how to get it.

Smartphone users who have Android 8 or Oreo compatible phones can download Android 10 updates. Google had released the beta version of the operating system on March 13, 2019, which came out to be a big hit in the world of mobility. The beta version of the Android Q was available for Google Pixel devices, is now available on almost all the mobile devices that were supposed to support this OS from Apple.

With plenty of new features and updations in the previous versions, Android Q appears to be the most talked mobile system since its release. Android Q also adopted several features included by its contenders like iOS in its latest release of iOS 13. This approach made Android Q an operating system conforming to all the needs of a smartphone user expecting a rich-featured Android release.

In this blog, we shall discuss all of the important highlights that need to be discussed on Android 10 or Android Q.

How Did Android 10 Turn Out to Be a Big Hit?

What is Android 10 and how did it become so popular? Even before its release, Android 10 was a center of discussion among technology enthusiasts. After its public release, Android 10 witnessed the fastest adoption rate in the history of Android. It indicated that Android Q would be a big hit for Google in terms of popularity and business outcomes, which later came out to be correct.

As per Google, over 100 million devices installed Android 10 just within five months from its release in September in 2019. This speed of adoption rate for Android Q was 28% faster than Android 9 in the given period. The android app development community suggested that the reason behind the success of Android Q was some remarkable developments led by Google in the previous Android releases. They mentioned the project Treble of Android 8 and project Mainline of Android Q in particular for allowing easy integration of the operating system in different hardware environments. Although Google wholeheartedly declared the adoption rates of Android Q, it did not clarify the number of devices (%) currently using Android 10.

Let’s discuss some of the most notable features released with Android 10:

After a long-term demand by Android users, Google finally included Dark Mode to its most popular release of Android 10. This feature will allow users to leverage a compatible view of the mobile screens in a darker hue alongside making the devices more battery-efficient. Although this feature will be available on all devices using Android Q OS, the utilization of this feature may benefit the OLED device users in particular in terms of reduced eye strain. This feature can be activated automatically when users put their devices on battery saving mode.

However, this feature was initially launched only to be available for applications by Google itself such as Gmail, Photos, etc, Android provided app developers API to enable this feature also on other apps installed on Android Q devices.

Android 10 came up with an interactive feature for third-party messaging apps like Facebook Messenger, Whatsapp, etc, where the users are suggested possible replies with the help of AI. Users can add suggested replies after typing a particular phrase or term. Users can get smart reply suggestions also while using applications like Google Maps where they can get address suggestions of a friend for whom they would have searched or been to in the past. Users can also leverage this feature in applications like Handy.

Dedicated location features will help smartphone users to indulge in strong privacy by giving them control over all the location-oriented information shared with any application. This approach allows users to only share the information with the apps while in use and end it after completing a particular session. With this feature, users also receive a notification informing them about the apps using or storing their location for a purpose in the background or on a live session.

This feature has enhanced the level of security in terms of utilization of their information like location, recent activities, and app permissions and disallowing ad retargeting or personalization.

Digital Welling suite of tools allows users to manage their screen time interactively and let them mute the apps they do not wish to get notified for while using a particular app. The suit of digital wellbeing tools includes focus mode which implicitly indulges in a strategy to engage focused utilization of applications. Other popular features in this suite comprise app timer, do-not-disturb, and notification customization.

How is Android 10 Better Than Android 9?

Users leverage frequent updates on the best Android 10 features. It indulges in a more interactive interface that makes it more engaging and usable. Features like Dark Mode, Gesture Navigation, Digital Wellbeing, and Smart Privacy Controls have made Android 10 more compatible than Android 9.

With functionalities like Smart Reply and 5G network integration, Android 10 led a transformation of mobility in the market. Android 10 is more advanced than Android 9 in many ways, but to perform a more sophisticated comparison between the two operating systems, we shall discuss the common features and the respective performances of the Android operating system therein.

Android 9 introduced an advanced color version of UI design and themes to the OS ecosystem of devices. This feature engaged in a better appearance of app icons with round edges and a more interactive interface.

A strategy to make devices consume less battery was included in every Android release. Android 9 includes the Adaptive Battery and Automatic Display Customization features that allow users to save their battery by adjusting brightness levels of the display when required.

As mentioned earlier, the Dark Mode feature that was released in Android 10 OS helped users to save a significant amount of battery life along with the other battery efficient features introduced in the previous versions of Android.

Android 9 made messaging more fun by introducing 157 new smile emojis. Many social media apps adopted emoji in their systems. This approach helped Android 9 to engage users on a large scale. Surprisingly, most of these emojis were gender-neutral, which was appreciated socially.

Taking this to the next-level, Android 10 introduced AI in messaging and provided users with a facility to get emoji and phrase suggestions through its Smart Reply feature.

Both Android 9 and Android Q are strong in terms of connectivity-levels and options. Android 9 allowed its users to connect and switch between 5 different devices while performing several actions.

Android 10 took this feature of Android 9 to the next level by allowing its users to protect the sharing and connectivity with WiFi password and QR codes along with a shortcut to access network settings. Users can choose if they wish to let their users connect through WiFi passwords or QR codes.

To gain a competitive advantage, Android 10 indulged in smart privacy options in its system settings. This approach updated the security setting to improve the privacy of the apps. Android Q facilitates users with several permission control options for a wide range of apps including camera, location, calendar, contacts, and microphone in particular.

With robust API options, Android 10 developers could deploy Biometric authentication of the users to access their devices, which can be used optionally as per the requirement of the users.

Android 10: A Cult Above the Rest

We here tried to explain Android 10 updates and features that can guide people to understand what they can get in Android 10. While developing apps, developers utilize the latest trends in technology that completely conform to the system requirements of different operating systems, and with Android 10, it has become more effortless. An aspiring android app development company would firmly consider the much-awaited benefits of Android 10 and its previous versions.

Android 10 is being used by a large number of users which makes it a big bot for app development companies to develop apps considering all the next-level features it has introduced in the world of mobility. When mobile manufacturing is implementing every important element to make the hardware of their devices compatible with the newly released operating system, it becomes the job of mobile app development companies to do their part as well.