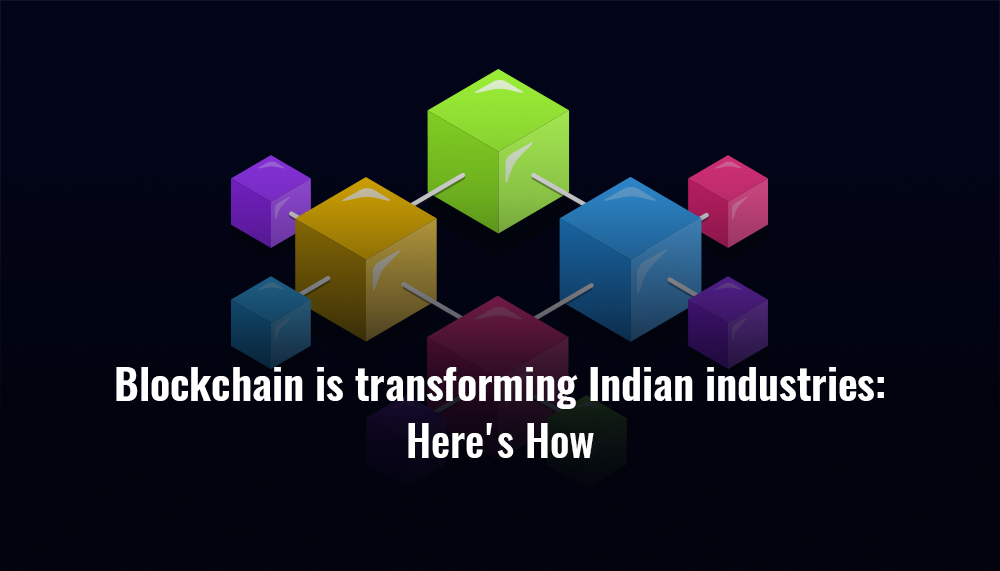 The concept of blockchain was first introduced in the year 2009. Since then, it continues to have a vast impact on various sectors and benefiting them through various improvements and revolutionary changes.  Blockchain is a decentralized system in which a worldwide network of computers uses blockchain technology to mutually manage the database that records transactions. Blockchain became popular due to Bitcoin. These records are known as blocks and the information in a block is completely safe from any alteration. So it is a sort of publically distributed digital ledger.

This way of recording the transactions is very transparent, safe and efficient as all the transaction records are shared globally to eliminate any discrepancy. In this article, we illustrate how various Indian industries are transforming via blockchain.

Since blockchain uses digital currencies, the immediate transfer of money between various countries is possible without large fees. People all over the globe can access easy banking opportunities with blockchain technology. The government can maintain the online identities of individuals along with their family which allows people to apply for loans, transfer money, etc.

The financial sector is obviously benefited because blockchain serves as an incorruptible digital ledger.  So many financial institutions have shown a keen interest in research works to develop blockchain technology.

Blockchain is very useful to track the place of origin of jewellery items like diamonds and precious metals. Since each block/record has a link to the previous block so we can find their journey right from the place of origin to the retailer counter. This eliminates the chances of any fraud. Hence is the most trustworthy tool in the Jewellery industry.

The blockchain platform facilitates a more reliable and secure process for goods transportation globally. It has remarkably reduced the cost of documentation and supervision of the transportation of goods. It keeps a systematic track of orders, receipts, and other trade-related information. The verification work is quickly done and the detailed shipping information is easily shared between suppliers and vendors

So the logistics industry has transformed with valuable additions like better transparency, larger scalability, and modernization.

It has been observed that the Indian healthcare industry lacks a perfect system for quickly recording the bulk data and usually takes more time to get the same data relating to the care of patients. The Indian government launched a big healthcare scheme in the 2018 Central budget and announced to make large investments to make healthcare available to everyone.

Blockchain technology has provided fantastic solutions at this very important step. Now the paperwork required in hospitals regarding patient’s data and doctor’s treatment has been minimized because the medical records are available on a blockchain. These are accessible by patients and also readily made available to various doctors.

The Energy Industry in India is getting a lot of benefits with blockchain systems as they provide the best ways to track energy production, usage, and handle payments. The information is shared and this ensures good opportunities for all. The solar energy is promising in those rural areas of India which are still deprived of electricity.

Since solar power is abundant, the development of self-sustained power generation units for every household is much better as it is least dependent upon a centralized framework. A blockchain-enabled decentralized peer-to-peer (P2P) micro power grid structure is quite cost-effective to sell/purchase solar power without regulating the power to a central grid.

The real estate industry of India is sometimes suspected of fraud due to a lack of proper information and transparency. Mistakes in public records can be there but blockchains enable them to keep the correct record and reduce paperwork. Blockchain systems are capable of improving the real estate industry in many ways.

Most of the usual messaging platforms use client to server communication where a unique ID is assigned to a thread and stored in a centralized database.  These platforms are insecure as the messaging data is impulsive to control by means such as network blocking or any other type of controlled monitoring.

Research works have been done to develop secure and encrypted message apps for business communications. Decentralized blockchain technology is used in encrypting messaging apps that solve various purposes.  Blockchain technology network is free from any federal control and impossible to spy on. For example, such decentralized platforms perform all authentications via blockchain rather than with email id or phone number thereby eliminating all chances of spying and monitoring.

The Indian entertainment industry suffers huge revenue losses due to piracy and monopolistic distribution practices. The Indian film and music industries lose several thousands of crores of revenue due to an illegal download of pirated movies and music.  It is possible to develop a network with the use of a blockchain system that controls the production and distribution of films in a fair manner that ultimately reaches the right audience without filters.

Blockchain can play an important role in transforming the supply chain industry. It takes a lot of time to make payments between customers and merchants. Some agreements require contract signing via lawyers and bankers which adds extra cost and holdup.  The clients, suppliers, and manufacturers interact via third-party rather than directly with each other.

So there are delays in this complicated supply chain which is a hindrance in the smooth working. Blockchain can easily solve all these issues because it can manage any type of tracking process and agreement.  The use of cryptocurrencies is best for exchanging money.

Indian companies who have adopted blockchain:

Similarly, there a lot of Indian IT companies involved in developing blockchain solutions for various purposes.