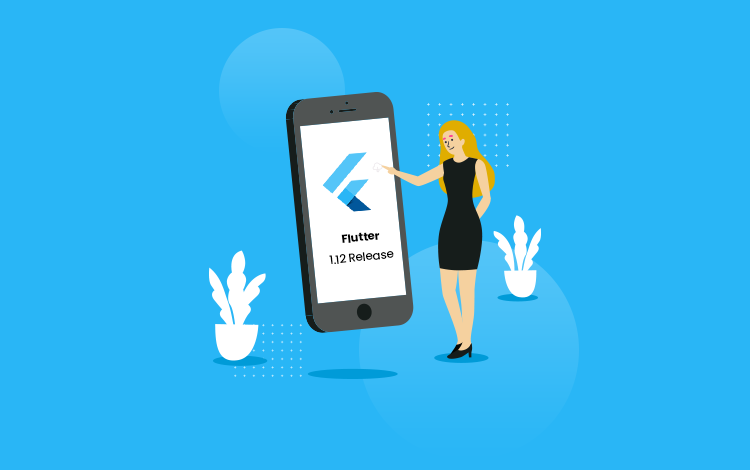 The best way to increase your corporate branding and overall reputation is to develop a mobile application. To adapt to the latest technology development every business needs to be updated as mobile applications have changed the way humans think and experience. Every user expects to have a wonderful structure, smooth animations, and execution to deliver on developers need to create a new feature faster than ever without compromising the overall quality.

What is Flutter Framework?

In May 2017 flutter framework was released and is a free open source Google mobile UI framework. It is written using C, C++, Dart, Skia Graphics Engine and provides a fast as well as an expressive way for developers to build the native apps on both iOS and Android.

There are various startups and mobile application development company have turned towards Flutter for their business development projects. The flutter development team announced the latest stable Flutter version 1.12.

The previous framework Flutter 1.0 was released in December 2018 and they have closed 5,303 issues and merged 5,950 pull requests from 484 contributors. There are various features and functionalities have been added by the team including Android App Bundles, support for iOS 13, and implemented keyboard events.

On 11 Dec 2019, the Flutter development team came up with the biggest release of the year. The team, in partnership with Brooklyn gathering dubbed Flutter Interact, announced Flutter 1.12 release. 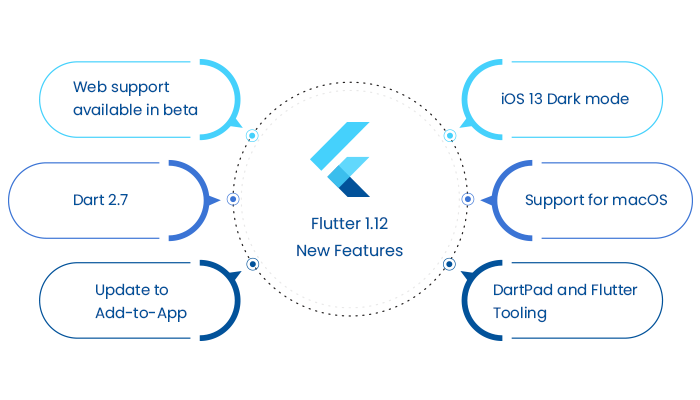 The new Dartpad provides Flutter’s web support so that when you are writing code you can see a running live Flutter program on the other side.

The Flutter tooling on the other side includes a new version of DartPad with support for Flutter, augmented IntelliJ-based IDEs, enhanced Dart DevTools, improved the Android build process and support for finding differences in rendered widgets between test runs.

Is Flutter Framework A Game Changer?

Android and iOS are the two major players in the field of mobile app development. Making separate apps for both these platforms is not only time consuming but also increases development costs. So, to assist cross-platform app development, tech giant Google launched a flutter framework.

It promises to craft high-quality native interfaces on iOS and Android. There are some key points that make Flutter highly futuristic and beneficial for mobile app development.

There are tons of widgets available that are cataloged in a beautiful way. Apart from that, it also offers extensive capabilities for creating complex custom widgets. The whole app development process is done with the help of widgets without having any other “application” object.

This development kit offers quick bug fixing and the addition of new functionalities in the ongoing app development process in seconds. Moreover, all the changes can be seen right away in the app so there is no need to compile every time and see changes.

Flutter takes a single codebase for building apps for both Android and iOS platforms. It directly compiles native arm code, uses the GPU and able to access platform APIs. In this way, it embraces differences like scrolling, navigation, icons, fonts, etc. when switching from one platform to another.

Using flutter, one can create apps quickly in a presentable manner. So, it proves to be very beneficial for startups and small enterprises who want funding from investors. Creating apps using the old traditional way will not only increase the total cost but also take more time.

With Flutter, mobile app developers need to write less code which means fewer bugs. Almost all of the code is shared between Android and iOS apps which makes coding easy and hassle-free. Moreover, its layered architecture allows for complete customizations which results in fast rendering and flexible designs.

Flutter is fully compatible with the most widely used app development tools like Android Studio, IntelliJ, Visual Studio, Swift, etc. So, developers can edit codes in their favorite tools as well by installing Dart/Flutter plugins.

It can run with no problems on low-end machines as well. So, mobile app development can easily be done on a system with 2GB RAM and dual-core processor whereas running the latest version of Android Studio on such a system is nearly impossible.

There are many big companies that are using the flutter framework to develop and improve their apps like Alibaba, Tencent, Abbey Road Studios, AppTree, JD Finance, and many more. As this project is launched by Google, there is a big team of developers who are constantly working to improve it.

So, in upcoming years, the Flutter framework is going to get better and may prove to be a game-changer in the field of mobile app development.

Make Your App Idea: A Reality with Flutter

Flutter is the most up to date versatile application SDK from the place of Google, proposed to make cross-stage application improvement simpler than at any other time. It has created a ton of promotion among designers and organizations the same.

As people around the world are obsessed with applications, and flutter is popular to develop an application. The reason behind to choose flutter as your application platform is easy as pie, it has lots of features to develop the application on iOS, android, windows, Mac, Linux and many more operating systems.

The applications like Google Ads(Utility),  Reflectly (Lifestyle), SpaceX Go!, Hamilton and much more popular brands that are using google flutter. Considering the centrality of Flutter as far as the eventual fate of Android application improvement, Flutter app development is an extraordinary decision for business advancement.

For the adoption of the latest technology’s businesses, these days need to make critical choices for building the mobile application. Come to Dart’s side and choose Flutter for the development of your next app that includes great improvements that also pull the developer’s community towards experiencing the framework.