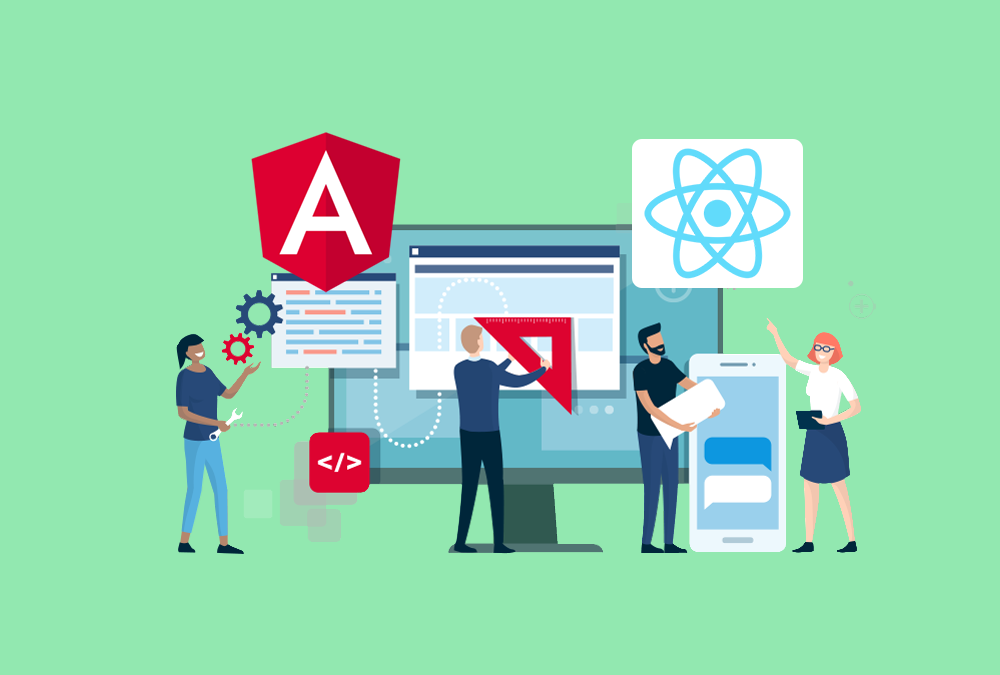 You can save time and resources by creating a cross-platform app if you want your mobile app to operate on multiple platforms with a single code basis. Also, users can receive results from cross-platform software to native applications.

The two most commonly used and powerful cross-platform software development frameworks in 2020 are Angular and React Native. React Native is a Facebook javascript library, whereas Angular is a JavaScript framework.

Choosing the correct frameworks for javascript is real confusion, especially when you have several super resourceful options and can facilitate the requirements of the project. However, selecting the right project demands involves awareness of many essential aspects. In this article, we will see the significant elements of the difference between Angular and React.

Mobile app developers nowadays concentrate on developing solutions that remain competitive on various market criteria, with the growing prevalence of mobile apps. Application developers are searching for alternatives to allow apps to be created faster and with fewer resources. Most of all, Apple and Google already have native tools to create apps.

over native app development frameworks, which has led to a significant shift in mobile apps’ development. 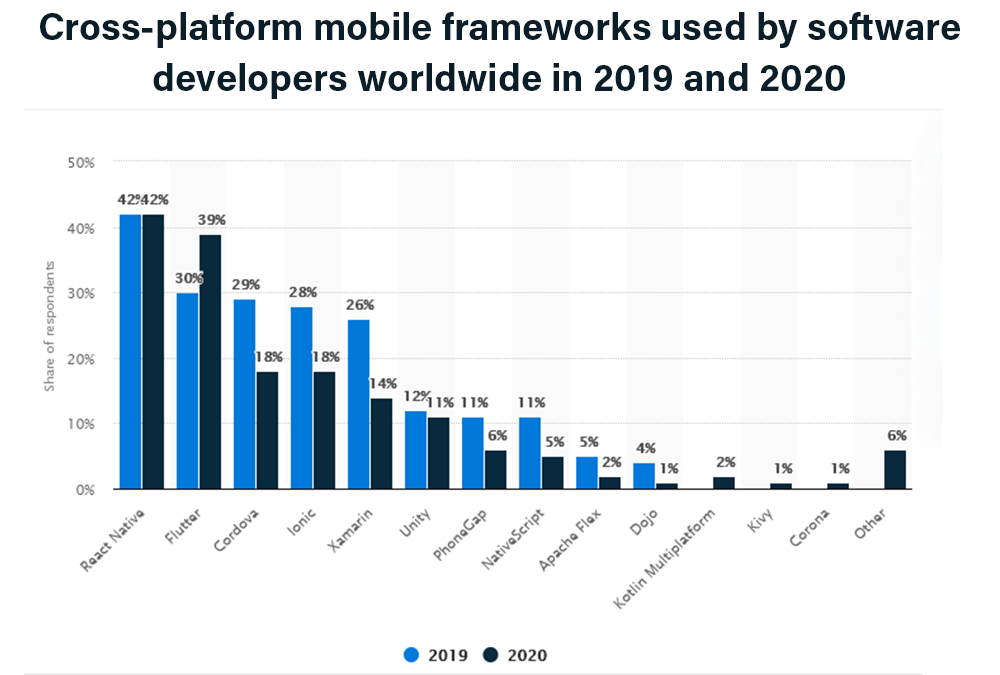 React is developed and maintained by Facebook, including Instagram and WhatsApp, and used in their products. It’s been around since 2013, so it’s not entirely new at all. It’s also one of GitHub’s most successful projects with over 150,000 stars in coding. Airbnb, Uber, Netflix, Dropbox, and Atlassian are some of the other notable companies which use React architecture.

Since 2016, Angular has been around, making it slightly younger than React Native, but it isn’t a new kid on the block, either. It is maintained by Google and was even used in more than 600 hundred Google applications such as Firebase Console, Google Analytics, Google Express, and Google Cloud Platform, some notable organizations that use Angular architecture.

React is a web and mobile application platform. It must, however, be integrated into Cordova for mobile growth. Additionally, a framework – React Native – is available for mobile development.

React app development is used to build web applications for both single and multiple pages.

Angular is suitable for mobile as well as web creation. However, Ionic does a lot of work in mobile development. Also, Angular has an additional mobile development platform, similar to React. NativeScript is the equivalent of React Native. In both single and multi-page web applications, Angular can be used.

React is a UI development system, so React frameworks have to use external libraries. For example, Redux, React Router, or Helmet optimizes state management, routing, and API interaction processes. Additional modules or libraries need to be built to functions, such as data binding, component-based routing, project creation, form validation, or injection.

Angular is a robust software development system that typically includes no external libraries. The Angular package can be used to implement all the functions as mentioned above – data linking, component routing, project generation, form validation, and addiction injection.

Angular itself is an enormous library, and it takes a lot more time to understand all the concepts it involves than in React. Angular is more challenging to understand, a lot of needless syntaxes are available, and the handling of components is complex. Some challenging features are implemented in the system core and can not be avoided by the developer.

Also, a single problem can be solved in a variety of ways. Although TypeScript is almost JavaScript-like, it also takes time to understand. The developer needs to put a little more effort into learning as the code is continuously updated.

React is minimalist: no injections of dependence, no classic models, no too complex functions. If you already know JavaScript well, the framework can be easily understood. Nevertheless, learning how to set up a project takes quite some time because there is no predefined project structure.

You must also learn the Redux library used for state management in more than half of React applications. The developer also needs more effort for continuous system updates. Also, React includes a tonne of best practices, which you need to remember to do things correctly.

Angular can use JavaScript or TypeScript, an overlay of JS specially created for significant projects. TypeScript is lightweight, code effortlessly to navigate, and typos are easier to find than JavaScript. The method of code refactoring is also easier and quicker.

JavaScript ES6+, in combination with JSX, is the basis of reacting. JSX is a syntax extension that resembles a file written in HTML that uses JavaScript. It promotes the interpretation of the code and makes coding easier. The React is enhanced by Babel – a code-translation method for compiling JSX code in a browser.

Bi-directional data binding adversely affects the performance of angular applications. A watch is assigned to each binding to monitor changes, and each binding continues to review all watchers and associated values. As a result, the more contacts you have, the more observers are identified, and the more complicated the process is.

However, Angular’s latest update boosts its performance dramatically and no longer lacks in contrast to React. The Angular application size is also significantly smaller than the React application size.

With the implementation of the virtual DOM, React’s performance is greatly enhanced. Since all virtual DOM trees are lightweight and server-built, the browser load is reduced. Also, because of the unidirectional data binding process, bindings are not allocated to watchers as in Angular. No further workload is generated, respectively.

The group continually develops enticing React UI. On the React portal, there are several free and paid UI components. If you are to use React material design elements, a further library – Material UI Library & Dependencies-should be mounted.

Angular has an integrated tool kit and provides a range of pre-built components in the material design. The keys, layouts, indicators, popups, and type controls are different. They are different. It simplifies and speeds up the setup of the UI.

Data binding is the syncing of the data from Model to View. The Redux should be embedded in the React, which will enable you to use immutable data, and unidirectionally increases the flow of data. Unidirectional binding is predictable, making debugging simpler.

Angular deals with two-way data linking and mutable data. Although the mutable and immutable data benefits are a heated debate, working with two-way data binding is undoubtedly more straightforward than the one-way approach. Simultaneously, two-way data ties impact output negatively, as Angular automatically generates a watcher for each binding. It is one of the significant benefits of Angular.

Angular is supported by several code-editing software similar to React. You can work, for example, with Aptana, Sublime Text, and Visual Studio. With Angular CLI a project can be started immediately. The server-side rendering with the aid of Angular Universal is completed.

In comparison to React, a single method may be used to completely evaluate angular. Jasmine, Protractor, and Karma are the platforms for end-to-end research in Angular. A browser extension Augury is another tool that debugs the application in the development mode.

Multiple code editors support React and it is one of the major benefits of React. In React, you can edit the code with Sublime Text, Visual Studio, and Atom. You can use the React App Build (CLI) tool to boot a project. The use of the Next.js framework would complete the server-side rendering process.

You will need several tools to evaluate the entire app written in React. For eg, the component test enzyme, the JS test jest, the unit testing reaction unit, etc. You may use a React Dev Tools browser extension to debug the program in development mode.

Angular popularity is less revered than React and faces a great deal of skepticism due to Angular 1.0 unpopularity. Developers used to condemn the system as too complicated since it took a lot of time to understand. But Google has created this system to enhance the reputation of Angular.

The React framework is one of the world’s most common JS frameworks, and support and the community are enormous. You must always keep learning the React framework as the code is frequently modified. Although the organization is eager to get the new updates out as quickly as possible, it is not so easy to keep up with all of the changes. There may be a shortage of papers, but mutual help in thematic forums also addresses the issue.

No framework is better than others. It depends on the requirements of your project. Both React and Angular are continually updated to keep the competitor up to date. E.g., while React is supposed to win by virtual DOM, Angular equalized the score by detecting changes. The major React and Angular difference is that Angular was seen as a winner by a leading company such as Google, the devoted group of React completely compensated for Google’s credibility, making React similar to Angular.

React or Angular is essentially more about individual choice, ability, and behaviors. You should probably choose the React framework if you are a programming beginner. You just work with what you know best as an experienced developer; do not forget to challenge yourself and begin to learn a new picture in both Angular and React technology. While you plan to get an app, you should consult the best-suited web development company and pick the platform that best suits you the best, be it React or Angular.

Is Angular still relevant in 2020?

Yes, Angular is an excellent choice for many companies even in 2020. So, it is a great option to build applications.

Is Angular dying because of React?

Yes, Angular is surely dying because of React because React offers a better rendering option than Angular.

In popularity, Angular is not dying. Instead, the focus was just diversified. Although React may be more evolutionary and demand-free, Angular remains steady despite the rising popularity of React.

Is Angular harder than react?

The use of syntax and questions in Angular makes it difficult for programmers at first but its features benefit more than React.

No. Angular is slightly younger than React.

Does Netflix use Angular or React?