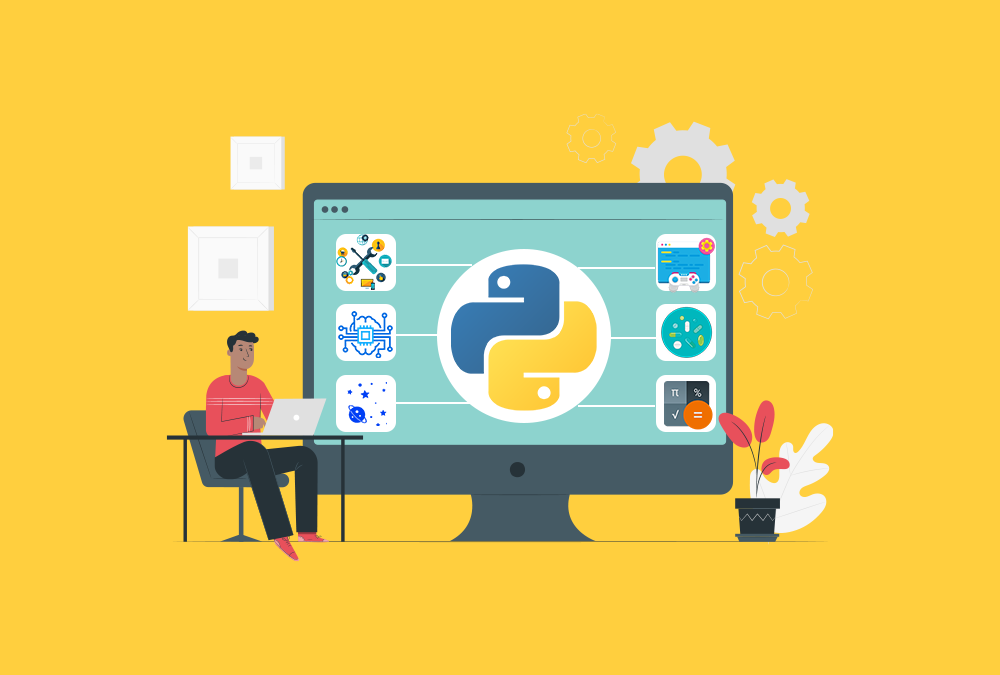 Python plays a small part in our lives, and it is no exaggeration to tell. It is one of those intangible attributes with a presence on (and beyond) our mobile devices. The Python uses are not limited to our mobile phones, but it extensively reaches out to the websites we browse, games we play for entertainment and is embedded even in the smart devices we use.

What is Python Programming Language- A General Overview

The Dutch programmer Guido Van Rossum created Python in 1991. It’s a language that is interpreted. Instead of relying on more complex machine languages, an interpreter executes it directly. Van Rossum wanted Python to be understandable and explicit English at the end of the day.

Guido Van Rossum has also made it an open-source language so that everyone can contribute to this fantastic language. The core aspect of Python’s theory is “readability.” Therefore, it aims to restrict code blocks (source code blocks) and emphasize creating a simpler, less noisy appearance in white space. It’s a flexible language that operates on several operating systems.

What is Python Used For?

Python stands out beyond its inherent simplicity and flexibility through its vast array of books and packages capable of meeting a wide variety of web development and data science requirements. So, let us go through a list of what is Python used for by taking examples of real-world applications of Python programming where it is dominating other competitors.

1. What is Python Programming Used For- Web Development

Python should be your go-to programming language when it comes to web development. What is the reason?

Python provides a wide range of web development solutions. These web frameworks are standard library modules, simplifying tasks, including content management, database interactions, and interfacing with internet protocols, such as HTTP, JSON, XML, SMTP, and POP3. Including the following web frameworks, such as Django, Flask, and even state-of-the-art Content Management systems.

2. What is Python Programming Used For- Game Development

Python should be your one-stop programming language for game development, and that too, with affordable ease. But why?

As stated previously, Python is packed with many useful extensions (libraries) that are useful for interactive gaming development. For example, libraries such as PySoy and PyGame are two Python-based libraries widely used for game development. They support the 3D game engine with Python 3. Python is the basis for famous casual games such as Fire Fighters and World of Fire Tanks, and even complex games such as Battlefield 2 and Civilization IV.

Besides game development, game designers can also use Python to build tools to simplify particular activities such as level design or dialogue book production and use these tools to export the tasks into formats that the primary game engine can use. Also, many game engines use Python as a scripting language.

3. What is Python Programming Used For- Scientific & Numeric Calculation

Python coding has become a vital tool in scientific and numerical computation through its large library base. Python provides the skeleton for programming and scientific data processing applications. In Python apps, such as FreeCAD, and other 3D modeling applications are encoded for users.

Some of the most useful scientific and numerical Python packages include NumPy, Pandas, and SciPy.

4. What is Python Programming Used For- Artificial Intelligence With Machine Learning

Inherent to conventional software models are AI and ML models and projects. The methods and technologies employed and the requisite skills are entirely different from designing typical software projects when we speak about AI / ML projects. AI / ML applications need a secure, safe, scalable language and are equipped with resources that meet these projects’ different specific needs.

Python has all these attributes, which makes it one of Data Science’s most preferred languages. Artificial intelligence is what is Python used for. Python is the easiest way to build AI and ML programs, consistent and platform-independent, a broad set of resourceful libraries, and an active community. There are many machine learning applications, from fraud detection to face recognition; it is being used everywhere.

5. What is Python Programming Used For- Enticing GUI

Python coding language is an English-like language, but it also has a modular architecture and the capacity to operate on many operating systems. Python is available on every OS. Combined with its rich text processing tools, these aspects make the Python desktop GUI framework an excellent choice.

Python includes several toolkits and frameworks for the creation of desktop applications. Some of the best Python-based Graphical User Interfaces ( GUIs) that developers can use to build exciting GUI projects are the PyQt, PyGtk, Kivy, Tkinter, WxPython, Pygui, and PySide.

6. What is Python Programming Used For- Software Development

Python packages and applications fulfill the goal to simplify the software development process. Python coding language will do anything, from designing sophisticated programs, including science and numerics, to creating desktop and mobile apps. This is why software developers use Python as a support language for build control, testing, and management. Developers are also efficient in making the most versatile Python mobile app according to the projects.

7. What is Python Programming Used For- Training Courses

Many colleges and schools worldwide have agreed to teach Python programming and informatics. As an illustration of Python’s potential as a tool for teaching, for example, MIT, one of the world’s leading universities in the field of technology, teaches computer science and programming in both on-campus and online edX. It may be used to inform higher-level principles related to other languages of programming.

Python can ease the work without the additional complexity that could add to the learning process by combining other languages such as Java and C. Notably, online lessons have become an integral part of everyday life for students of all ages all around the world. In the last few years, there has been a massive increase in free online classes and services.

8. What is Python Programming Used For- Computer Vision & Image Processing

For computer vision and image processing, Python is used to extend areas quickly. Image processing aims to process the image, modify it, and return the original version. In comparison, computer vision aims at helping the machine recognize and view an image and its meaning. This is one of the most advanced uses of the Python programming language.

Python also finds special use cases in image processing and graphic design applications alongside all the above-listed uses. Globally, a programming language is used to develop and construct 2D modeling applications such as Inkscape, GIMP, Paint Shop Pro, and Scribus. Python is also used by many 3D animation sets, including Blender, Houdini, 3ds Max, Maya, Cinema 4D, and Lightwave.

9. What is Python Programming Used For- Medicines & Pharmaceuticals

Even in the medical sector, Python has multiple usages. You may be impressed by the convergence of science and medical experience to provide patients with a precise and reliable diagnosis and care. World’s largest pharmaceutical businesses used the current computing models to boost, strengthen, expand, and sustain their capabilities. And this what does Python do– make things simpler.

Researchers employed these simulations to predict the chemical composition and impact of molecules in the body. This allowed scientists to recognize possible new drug molecules and to begin researching them in the laboratory more rapidly. Hematology is another biological application of Python. Specialists usually interpret blood samples by measuring and manually marking cells, but it can be changed with the aid of automation.

10. What is Python Programming Used For- Astronomy

Python coding program also provides astronomy and astrophysical applications. There are separate classes, utilities, and a packaging system to use popular astronomical instruments in the Astropy kit, one of the major frameworks for astronomy provided by Python programming.

Astropy forms part of a bigger initiative known as the Astropy Initiative. This community endeavor supports an ecosystem of interoperable astronomical packages to create a standard core astronomy package in Python.

Another framework of Python that is used for astronomy is the SunPy. The SunPy package is described as the Python solar data analysis environment built. It is free and open-source. It builds on the functionality of Python packages like NumPy, SciPy, Matsplotlib, and Pandas.

Make Use of Python Programming Language

Surely, the above-listed Python uses will satisfy almost all of the programming needs after reading all of its flexible and distinct real-world applications. In recent years, Python implementations, particularly in machine learning, have been gaining new momentum in data science. It further has increased the list of Python language uses.

Learning Python will certainly open many doors to you irrespective of the area you work or wish to be in. Python is going to stay here, regardless of the competition. If you are searching for Python services, you can contact a web development company that perfectly suits your business paradigm.

Can Python be used to make apps?

Yes, Python is one of the most versatile programming languages used for app development. Various applications use Python. E.g., Dropbox and Instagram.