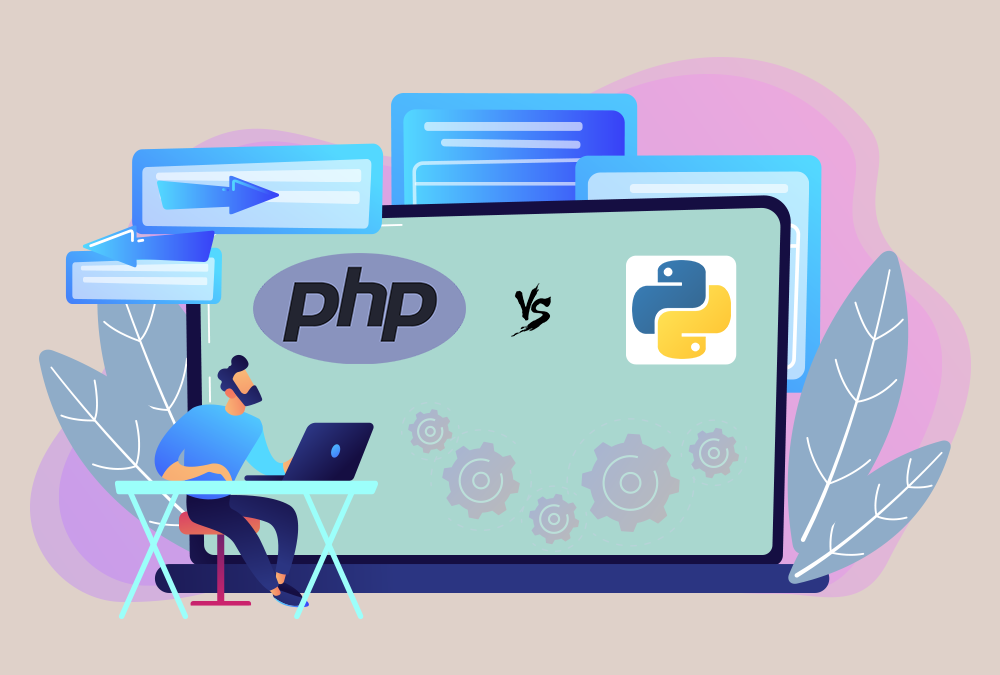 In this article on PHP vs Python, knowing the general overview of Python is important. Python is a language of high-level programming used for general purposes. In 1991 Guido van Rossum, a Netherlands programmer, built Python with a code readability ideology, with substantial use of space. This approach approaches object-focused and helps programmers to write clean code.

Often Python’s regular exclusive libraries are defined as ‘batteries included.’ It also supports the paradigms of process and accessibility. With automated memory management, the waste collection framework in Python is very simple. The best Python version is the latest update 3.7.3, published on 25 March 2019.

The last overview of this article on PHP vs Python is the brief overview of PHP programming. Like Python, PHP or Hypertext Preprocessor is also generic. It was originally developed as a language for web development. Rasmus Lerdorf founded PHP in 1994. You can run PHP with an HTML built-in command-line interface ( CLI).

Moreover, a mixture of different site template schemes may be used. The code as a module is normally used on a web server by a PHP interpreter. We may also use PHP for robotics control and stand-alone graphical applications if we hold the web context separately. PHP released its latest 7.0 that has been released on 3rd December 2015. PHP is one of the most famous programming languages for developers in the current development scenario.

Python was faster than PHP a few years earlier, but this changed after PHP 7 update. The core PHP team has done everything to speed up the language, and PHP is faster than Python now. High speed will dramatically boost performance if developers need to process massive volumes of data.

However, both languages are good for making quick and small-scale applications. The variables that can influence software efficiency irrespective of the programming languages are hardware capital, code logic, the sum of the memory, breadth of its data path, and access time for hard drives. Low disc capacity and failing RAM or hard drives can slow down applications, or crashes and errors can occur.

PHP versions 5.x appear to drag their feet, but PHP 7.x has been a real flyer, up to 3 times so easily, relative to the average Python application. In performance-critical systems, speed also becomes a key factor, and any discrepancies will make a major difference in performance if, for example, you handle a million hits a day for a bank.

It’s just not sustainable to work with that knowledge just 33% as easily as your competitor. The result of PHP vs Python will be PHP. (Nevertheless, it is worth noting that the disparity in delay between the two will be even less apparent in easier situations.) The comparison of Python vs PHP benchmark majorly lies in the comparison of the performance.

Python Vs PHP For Web Development

The likes of Django, Flask, Pylons, and Pyramid are some of the most widely-used Python web frameworks, while Codeigniter, Zend, Laravel, and Symfony are the comparable PHP-based ones making PHP stand in this battle of PHP vs Python web performance/

Django has a well-deserved reputation for speed, scalability, stability, and ease-of-use. Because of its strength and strength, it is common and many applications rely on it. Codeigniter and Laravel are equivalent to PHP implementations.

Even if web development is the feature that’s among what is Python good for, Python vs. PHP leads to a further tie, as the two offer equally amazing choices. Yet rookie developers choose Django because it is simple to customize and because coding is faster.

PHP Vs Python For Web Applications

While Python has been designed for general purposes and PHP has been developed as a web-based language, they are both suitable for the creation of web applications. The language collection can rely on a given project’s needs. For starters, PHP would be a good match if an organization chooses to create a small or medium-sized project with a restricted set of features.

Web applications are one of the proudest segments for what is Python used for. If an organization desires to automate or speed up the creation process, the ready-made tools can also allow the use of PHP. The fact that PHP offers unrivaled integrations with multiple applications from 3rd parties is also a perfect choice for e-commerce websites and content management.

PHP Vs Python For Backend

Backend is the major difference between PHP and Python. The database is one area in which PHP can continue claiming a major victory over Python in connectivity and performance. It advances in this field with access support for more than 20 different types of databases, while Python struggles with restricted data integration choices.

As PHP based systems can communicate quicker, the affinity between Python-based frameworks and ORM also pays off. Python is fast graduating and, in terms of database access and efficiency, we might soon see it usurped by PHP.  But right now, Backend is the major field for what is PHP used for.

In reality, too many start-ups are developing their back-end apps with Python. They are making more creative database options ingeniously which will finally bring value to the whole Python ecosystem. Let’s just assume that PHP is here for the time being a champion.

Difference Between PHP and Python

Our final review concludes with the very tiny edge of Python over PHP. This sounds genuinely right. Two good options are made by PHP 7 and Python 3 for web application development in 2020. But developers are choosing Python over PHP when it comes to picking one. Which one do you pick when considering PHP versus Python? Yeah, that’s what you have to do.

Do you need to share the environments of your workstations? Python is the correct answer. Does your squad have developers who know any PHP already? Your best bet is potentially PHP! Do you need fantastic Unicode support for your application? Python’s going to be the way. If you need any application to be developed by using any of these languages then you can always contact the best app development company in the market.

Why python is better than PHP?

Python is powerful, portable, open-source, and is relatively easy to learn, and fun to use. Its syntax is simpler and code is more readable in Python compared to other programming languages like PHP, C, and C++. PHP is not used for general-purpose programming and is only used for creating dynamic web content with HTML.