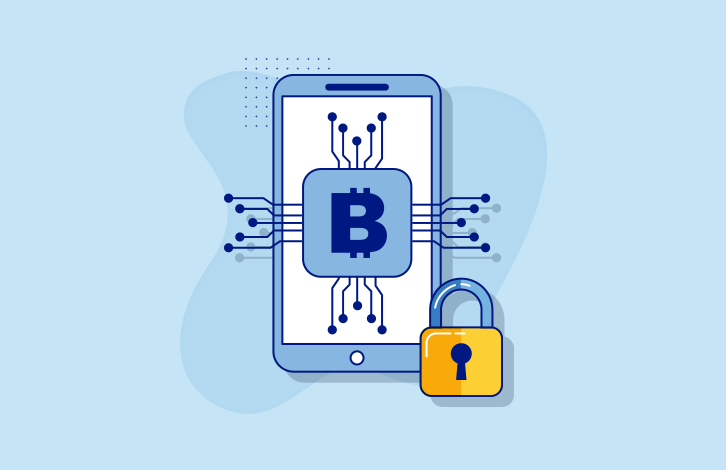 Blockchain technology has expanded its arms further from cryptocurrency applications to fields like the Healthcare industry, governmental services, finance, and IoT applications. It has introduced new potentials of processing transactions more effectively.

But is Blockchain safe? The technology provides organizations a high efficiency with minimal risk possibility. Hence, it eventually becomes the best choice of customers when seeking secure, faster, and simultaneous transactions and is expected to contribute 10% to the global gross domestic product (GDP) by 2027 as per insights of a survey accomplished by the World Economic Forum.

Blockchain technology can transform the way an organization performs its tasks. It helps industries like healthcare by offering better outcomes to the businesses in terms of quality and revenue. Is blockchain safe enough to counter the transforming security demands of businesses? Blockchain security is indulging faster and transparent individual or bulk transactions. Along with the sustainable applications of this technology, how safe is Blockchain to implicate the technological needs of modern-age businesses?

What is Blockchain Technology?

There is an immense need to understand Blockchain’s process architecture and its growing demand in different fields and industries. Blockchain platforms have led many distinguishable transformations in the core Blockchain security in recent years.

How secure Blockchain is? The technology has gained immense popularity because of its increased utilization across different industries such as Banking, Healthcare, Real Estate, Legal Industry, Security, Government, and Education. Another significant reason for Blockchain being the most-sought technology of the age is the inclusion of sustainable Blockchain security features.

Is Blockchain Safe and Why Has It Become So Popular?

To sustain the applications of Blockchain and security, making it credible, and protected from any vulnerability that can cause severe impacts, each Blockchain transaction is verified and processed through an identification check performed with the help of the ledger. Each transaction record includes a timestamp with reference links.

Why is Blockchain secure as a technology? Here we will discuss different terminologies that help Blockchain to become a secure technology for its users in different parts of the world.

How is Blockchain secure? Is Blockchain really immutable? To answer such queries, we shall discuss some essential components of the Blockchain technology that play a vital role in strengthening security? Identified as a peer-to-peer distributed ledger technology, Blockchain immutability records transactions across different parties in blocks. It alongside secures the transaction records to offer a credible, proactive, and transparent atmosphere and also assures no requirement of previously used transaction intermediaries to validate or record transactions.

As discussed before, Blockchain is present in the form of a distributed and decentralized ledger, this provides Blockchain with a different identity of being comparatively more secure than other ways of processing transactions and better than conventional databases or ledgers.

Being a distributed ledger, Blockchain engages thousands of secure replicas of information available on different nodes of the network located in other parts of the world. Can Blockchain technology be hacked? This strategy enhances the levels of security for the data since malicious attackers find it easier to attack a centralized ledger with a single copy of user-data that is not the case for a distributed ledger like Blockchain.

Blockchains are of two types: permission-based and permissionless, based on providing authorization to particular data sets. Permissionless Blockchains permit different users to access them. This type of Blockchains helps the users in the case of Bitcoin and Ethereum. These are the cryptocurrencies that individual customers want to access and trade.

Blockchain utilizes cryptography to engage in next-level security that comes more from its property of being a distributed ledger. Cryptography, in this case, is used to put company data on Blockchain and extract hash as input and output. A standard hash’s length is 64 characters, 16 times longer than a typical mobile phone password. The prime objective of using cryptography in Blockchain was to ensure previous records of transactions are not played with or misused.

Consensus refers to two or more parties agreeing to each other on the correct state of data in the system and subsequently synchronizes the data on Blockchain. The Consensus makes deals and transactions not to break down and protects them efficiently. Let us take this through an example of two parties, of which one is a seller, and the other one is a purchaser. If they want their deal done and stored in the Blockchain, there should be an agreement between the two parties. 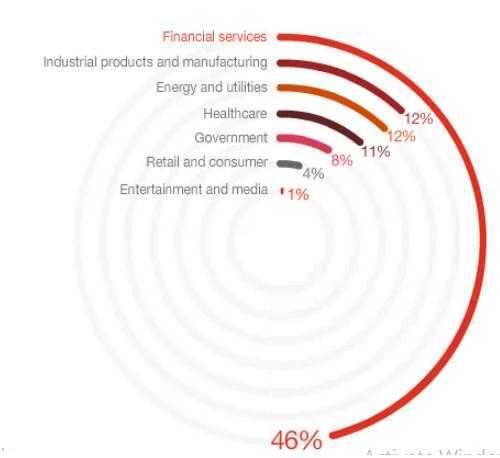 How a Security Reference Architecture Help to Secure Blockchain? 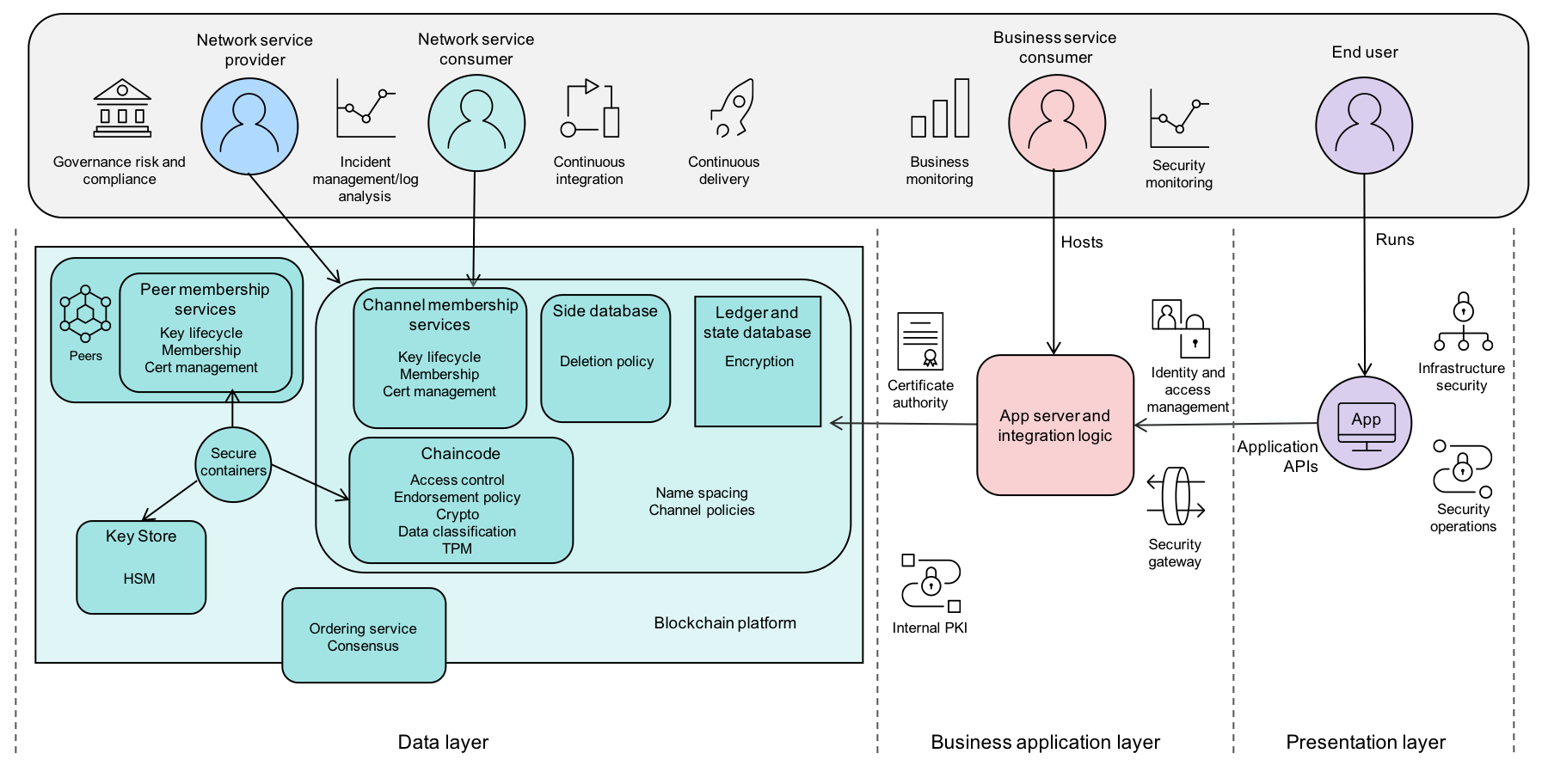 How Do I Make Blockchain More Secure?

As mentioned earlier, developing secure Blockchain solutions can significantly analyze the risks and threats and adopt security control over the application.

Global Blockchain Survey report of 2019, the company asked organizations about the barriers they face while handling projects. 29% of respondents considered potential security threats as barriers to their projects. Surprisingly, the number of respondents considering potential security threats as project barriers was 35% in 2018. Experts credit increasing adoption and scale in Blockchain technology.

Moreover, 71% of enterprise organizations and 48% of emerging disruptors considered Blockchain to provide greater security than traditional IT solutions.

The World Economic Forum in an article mentioned that it might be a difficult thing to gain simultaneous security and privacy in a traditionally structured information system. The report also indicated a possibility of its occurrence with Blockchain to do so by allowing confidentiality in the public infrastructure that would secure information systems from malicious attempts to change the data and by keeping the size of a ledger in a maintained form.

Curtis Miles of IBM Blockchain explained the security prospects of Blockchain in brief on its website. He claimed that Cryptography is the most significant terminology used to make Blockchain the most secure platform. Later, he explained that users could not alter Blockchain data from a single computer but require a lot of computing power to gain access to each or half of the majority of any Blockchain consensus to alter it all at once.

In a survey accomplished by a research team at Accenture, they found that 80% of respondents were expecting the Blockchain technology to become incorporated into their business systems in the next three years. This report indicated the earliest need for contemplating on Blockchain app development and its security implications. The company has said that conventional security practices should be compromised in the best possible way to ensure the applications’ sustainable security and environments.

The technology provides organizations a high efficiency with minimal risk possibility. Hence, it eventually becomes the best choice of customers when seeking secure, faster, and simultaneous transactions and is expected to contribute 10% to the global gross domestic product (GDP) by 2027 as per insights of a survey accomplished by the World Economic Forum.

Blockchain technology can transform the way an organization can perform its tasks. It helps industries like Healthcare by offering better outcomes to the businesses in terms of quality and revenue. It is indulging faster and transparent individual or bulk transactions, that is another particular reason why you can call Blockchain a secure technology.